This article was originally published on the World Education Blog. It is part of a series of  interviews, opinions, award-winning projects, WISE chats and infographics that will be featured on the WISE website throughout March to illustrate progress that has been made in girls’ education and women’s empowerments and the remaining challenges.

By Pauline Rose, director of the Education for All Global Monitoring Report

What kind of policy reduces or banishes inequality? International Women’s Day on March 8 is not only a chance to celebrate greater equality for women and highlight inequalities that persist – it’s also an opportunity to focus on policies that can make a difference.

It is vital to put the spotlight on those who continue to be left behind. 116 million young women need a second chance to get the basic skills they need to find decent jobs, because they either haven’t been to school or weren’t able to learn. Many of these young women are living in poverty. Our new interactive visualization on our World Inequality Database on Education (WIDE) shows that, in 11 countries, 90% of the poorest women aged 15 to 24 have not even completed primary school. Ten of these countries are in Africa. Pakistan is the only non-African country where 9 out of 10 of the poorest young women haven’t completed primary school. 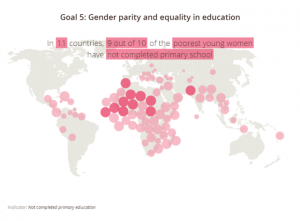 Some countries where this situation was worst, however, have made good progress over the past decade. They still have a long way to go, but some are moving faster than others by implementing carefully targeted policies. Let’s compare new data on the WIDE website from Ethiopia and Bangladesh. 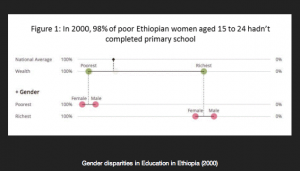 In 2000, Ethiopia would have been amongst the worst performing countries: an astonishing 98% of poor Ethiopian women aged 15 to 24 hadn’t completed primary school. By 2011, this share had fallen to 88%, thanks to government efforts and ambitions, and the average figure for the country fell from 81% to 59% over the same period.

Almost nine out of 10 poor young women who have not completed primary school is, however, still very high. Serious and sustained commitment and financing is needed, including aid from rich countries.

Bangladesh has made faster progress over a similar period thanks to policy reforms targeted at girls. In 2004, 71% of poor women aged 15 to 24 hadn’t completed primary school. By 2011, this share had fallen to 52%.

This unique pattern is mainly due to stipends introduced in the early 1990s, which provide fee-free secondary schooling and a payment to all girls in school except in the largest urban areas.

There is still much more to be done, including boosting government spending on education. Kenya, which has income levels similar to those in Bangladesh, spends three times as much on education as a percentage of gross national product. In the meantime, NGOs in Bangladesh such as BRAC are helping young women to get a second chance to acquire skills that they missed out on, as we highlighted in the 2012 EFA Global Monitoring Report. Such programmes can also offer important lessons for countries like Ethiopia.

It’s important to note that the theme the United Nations has chosen for International Women’s Day this year – violence against women – touches on one reason girls don’t go to school. As we found in the 2011 Education for All Global Monitoring Report, safety fears keep large numbers at home, especially girls and young women who have to travel a long way to get to school.

Dr. Jacek Strzemieczny “Education is about empowering students as learners”

Groundbreaking Solutions from the Frontline of the Climate Crisis

Access and Inclusion
As the climate situation develops, where must we look to find remarkable solutions to this...
2021 WISE Research

Revisiting Equity: COVID-19 and Education of Children with Disabilities

Education is the Key to Creating the Green Workforce of Tomorrow, Today

Access and Inclusion
What does COP26 entail for the future of climate change learning?