• Nearly half the world’s 1.6 billion primary and secondary students will not return to school in 2020.
• These 711 million learners will propel the total number of days spent out of school in 2020 from today’s count of 179 billion to 300 billion by end of year.
• The vast majority (84%) of children who will not return to school this year come from lower-income countries, where distance learning technologies are not reaching all children, sharply reinforcing and accelerating inequality.

Most of the world’s 191 countries closed schools quickly in March as the gravity of the pandemic became clear. Six months later, news headlines along with images of appropriately-distanced full classrooms create an impression that school reopening is a challenge being gradually and steadily conquered.  However, the massive numbers of learners who have not yet returned to school – and who are unlikely to do so before the end of this year – are currently the focus of less attention.

Countries face starkly different realities when it comes to COVID-19 cases and the feasibility of reopening schools safely. Studying countries’ experiences can help get children back to school more quickly and safely – and better support distance learning where schools are not yet opening.

Because of global economic dynamics, and the challenges of meeting requirements for safe reopening, it isn’t surprising that nearly all high-income countries – 61 of 67 countries – have reopened their schools, compared with just 19 of 30 low-income countries:

Sources: Insights for Education, UNESCO, World Bank
1 As of September 17, 2020. Includes countries on academic break planned to open or close on return.

Learners from high- and upper middle-income countries account for nearly half of all enrollments globally, yet will account for only 16 per cent of lost school days. In sharp contrast, the other half of global learners, from lower-income countries, will have accrued a ‘learning deficit’ of 84 per cent of the 300 billion projected days of in-person learning lost due to COVID-19 in 2020. The consequences of this in-and-out-of-school divide are serious and should invite us to analyze specific countries’ situations. 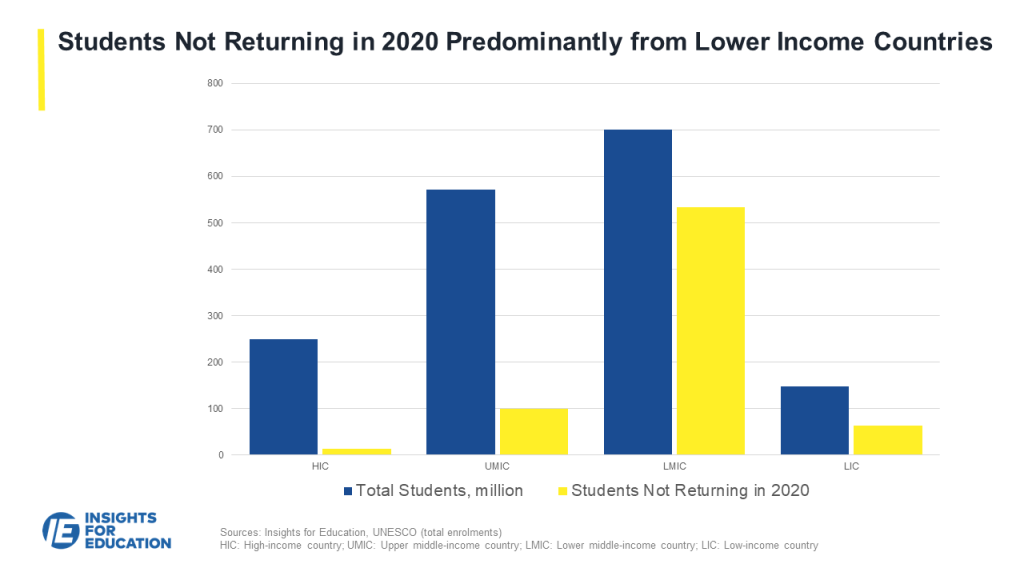 Of the 52 countries with schools still closed, eight plan to reopen later this year. Eleven do not plan to reopen in 2020, including Kenya, where students will repeat the school year; and India, which will reopen only with distance learning as of September 21. The remaining 33 have not committed publicly to resuming in-person classes.  These 52 countries are following four patterns of reopening decisions: Insights for Education’s analysis of countries’ experiences over the past six months shows reopening during upward trends has generally not resulted in an explosion of cases, as feared. It has been effective when carried out gradually, in limited stages, with thorough preparation, monitoring and response plans, and community engagement between parents and teachers.

This has happened in Switzerland, Austria, Czech Republic and Denmark.  It has even been the case in countries with limited resources and health system capacity such as Sierra Leone, Senegal and others in sub-Saharan Africa. Gradually opening up by year-groups and rotating classes make it easier to train staff and engage the community gradually, rather than all at once. Country-specific and regional comparisons are made available on education.org where the Back-to-School Country Tracker is updated daily.

In contrast, turbulent reopening experiences, even in countries with COVID-19 cases on the rise, have been limited. These were mostly in settings where distancing, hygiene and staggering of returns were not strictly observed, where communities were not meaningfully engaged, or where there was not enough preparation prior to reopening, such as in Israel and South Africa.  While causality between school opening and virus cases cannot be drawn, reviewing patterns can aid those entrusted with reopening decisions.

We will certainly better understand the implications of reopening after assessing post-break returns to school across the world in the coming month. Sixty-two countries will fully reopen in August and September, offering the first real global test with so many countries opening nearly simultaneously. Relentless tracking and sharing of these observations can offer decision-makers insight and confidence to help get the most marginalized students back to schools as soon as possible.

Acknowledgements: Andrew Bollington, Eileen E. O’Malley, Natasha Lopes Muller, Beau Crowder, and Domitille Harb are thanked for their valuable contributions provided in the development of this analysis.
Traditional Higher Education has lost its way. Missionless and Visionless, it is time for Massive Distributed Teaching & Learning

Without equality for girls, there’s no transforming education

Fostering wellbeing: Reflections on Self Sustainability

Access and Inclusion
What are the critical decisions we have to make regarding wellbeing?
Naza Alakija, Founder, SAGE Foundation

Groundbreaking Solutions from the Frontline of the Climate Crisis

Access and Inclusion
Where must we look to find remarkable solutions to this crisis?