Throughout the ages, wise men and women from Confucius in the East to Aristotle in the West, have declared that education is central to the human condition. John Dewey went as far as saying that “education is not preparation for life; education is life itself.” Yet, despite such lofty proclamations the past 200-odd years, which saw the very welcome democratization and spread of mass education around the world, has also seen the progressive subordination of education systems to the needs of the economy.

The current global pandemic and its immediate aftermath provide an opportunity to rethink the why, the what, and the how of education. The pandemic has shone a spotlight on our economic systems with many coming to realize that the majority of our most essential workers—nurses, teachers, cleaners, deliverymen, garbage collectors, paramedics, check-out clerks, farm workers, etc.—almost never reap any but the most meagre rewards from the system to which they are deemed essential. So, too, with education, we must begin our rethink by asking ourselves who is our education system supposed to serve, and is it meeting expectations?

The answer is quite clear. Education systems are supposed to serve everyone. Indeed, education has traditionally been viewed as the great social leveler, providing opportunities for advancement regardless of one’s socio-economic starting point. Unfortunately, that promise, never fully realized, is receding further and further from becoming a reality. Indeed, there is a strong argument to be made that education systems are now net contributors to declining rates of social mobility around the world. It’s not hard to see why. Education systems are structured hierarchies, designed to channel ‘the best and the brightest’ into the professions and occupations that offer the greatest potential for private economic gain. Elite schools and colleges, examination-based grading systems, and streaming on the basis of attainment, all contribute to a stratification of the education system that closely mirrors the economic stratification of our societies.

So, how do we begin to fix the problem. The first step is to once again recognize that the primary purpose of education is not to train the workforce of today, tomorrow, or yesterday, but to enable human flourishing. At its core, a good education should be about gaining and continuously updating our understanding of four things: consciousness, civilization, ecology, and the cosmology that envelops them. I like to think of them as concentric circles. Our starting point—the inner circle—has to be the individual. As Descartes argued nearly four centuries ago, our individual consciousness is probably the only thing that we can be absolutely certain of. And indeed, ancient sages from the Buddha, to Laozi, and Zenon, founder of the Stoic school of philosophy, have argued that our inner world, our conscious experience in the form of thoughts and emotions, is the domain over which we can achieve the greatest mastery. And as modern psychology and neuroscience are increasingly affirming, this can have profound and long-lasting consequences for our well-being and the well-being of those around us. But mastery is only achieved through practice and perseverance. Education must therefore embrace a far deeper understanding of consciousness, or to put it colloquially, “what makes us tick” from the very beginning, and not leave this important domain of knowledge and understanding to self-proclaimed gurus and pop-psychologists. Mastery of one’s inner world and its workings ought to lead to individuals who are more resilient, tenacious, and ultimately fulfilled regardless of the particular circumstances that they may find themselves occupying.

On to the next circle—civilization. We know from evolutionary biology and from history that individual human beings thrive not in isolation but in community, and that the highest form of community is civilization. Two great present-day thinkers—Nicholas Christakis and Yuval Harari—have both emphasized this in their recent groundbreaking works. In Sapiens Harari articulates what he calls the unique evolutionary advantage of humanity, its superpower if you will, the ability to collaborate flexibly in very large numbers, across space and time. And in Blueprint, Christakis reassures us that the evolutionary ark of humanity bends towards forming good societies, and that successful societies are characterized by amongst others: (1) The capacity to have and recognize individual identity; (2) Love of family; (3) Friendship; (4) Cooperative social networks; and, (5) Social learning and teaching. But none of this is predetermined and we must work hard to ensure that our evolutionary ark continues to bend towards individual and collective human flourishing. In order for that to happen we must all develop a nuanced understanding of what makes societies work and how we can harness our superpower to allow multiple pathways to flourishing for all of us.

On to the third circle—ecology. It is said that a picture is worth a thousand words, and just over half a century ago the world saw for the very first time an image that is worth not a thousand or even a million words but every word that has ever been written or spoken by man. The first time the Earth was ever photographed was in 1968 by the crew of the Apollo 8 mission. Many observers argue that this single image is responsible for the birth of the modern environmental movement. I don’t know if that is true or not but I would be willing to bet that for most people the Earthrise image evokes strong, positive emotions, and a feeling that this, all of it, not just any one particular little corner, is home. Unfortunately our home and our place in it is under threat from the climate crisis and there is an urgent need to harness our creativity to turn the climate crisis into an opportunity to reimagine and reconstitute the way we produce and consume energy; all the while recognizing that we cannot have a modern technological civilization with all the benefits that it provides us, without energy. Again, education must be a key driver not just of raising awareness of the profound responsibility that we have to nurture and protect the ecosystem that nurtures and protects us, but also to unlock the scientific and engineering solutions that will allow us to arrest and eventually reverse the climate crisis.

People have often wondered how does humanity fit in the ecosystem that is planet Earth? What purpose do we serve? Are we destined to destroy our ecosystem and in the process ourselves? I don’t believe so. We have the capacity to define our own purpose and here’s a suggestion from the actor and environmental activist Pierce Brosnan, that I find particularly compelling: “Of all the species in the world ours is the only one capable of protecting all the others.”

And now we come to the final circle the one that holds all the others. Understanding the powerful physical, chemical, and biological forces that underpin reality in our universe has of course always been a key driver of our quest for knowledge and understanding. From Einstein’s theory of relativity that makes GPS and hence accurate contact tracing possible, to Mendeleev’s periodic table and the chemical engineering that allows us to manufacture powerful pharmaceutical compounds, to the underlying germ theory of disease first articulated by Ibn Sina and culminating after almost 900 years with the work of Louis Pasteur and Robert Koch, science and the scientific method underpin the incredible progress that we have made as a species and global civilization.

Unfortunately, while the stock of our scientific knowledge continues to grow exponentially, broad-based scientific literacy is on the decline. Education must play a part in arresting this decline, and broad-based scientific literacy must become a foundational subject at all levels of education. It is our vaccine against ignorance, fear, and superstition. But more than providing us with the knowledge to fuel our imaginations, and the tools to power our technology, science also provides us with a humbling perspective. And here I want to end this short essay by quoting one of my favorite scientists, authors, and broadcasters, the late great Carl Sagan. Commenting on another photograph of planet Earth this time taken by the Voyager 1 Space Probe in 1990, six billion miles away as it began to cross the boundaries of our solar system, Sagan said: 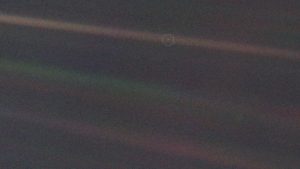 “Look again at that dot. That’s here. That’s home. That’s us. On it everyone you love, everyone you know, everyone you ever heard of, every human being who ever was, lived out their lives. The aggregate of our joy and suffering, thousands of confident religions, ideologies, and economic doctrines, every hunter and forager, every hero and coward, every creator and destroyer of civilization, every king and peasant, every young couple in love, every mother and father, hopeful child, inventor and explorer, every teacher of morals, every corrupt politician, every ‘superstar,’ every ‘supreme leader,’ every saint and sinner in the history of our species lived there—on a mote of dust suspended in a sunbeam.

Our posturing, our imagined self-importance, the delusion that we have some privileged position in the Universe, are challenged by this point of pale light. Our planet is a lonely speck in the great enveloping cosmic dark. In our obscurity, in all this vastness, there is no hint that help will come from elsewhere to save us from ourselves.

The Earth is the only world known so far to harbor life. There is nowhere else, at least in the near future, to which our species could migrate. Visit, yes. Settle, not yet. Like it or not, for the moment, Earth is where we make our stand.

It has been said that astronomy is a humbling and character-building experience. There is perhaps no better demonstration of the folly of human conceits than this distant image of our tiny world. To me, it underscores our responsibility to deal more kindly with one another, and to preserve and cherish the pale blue dot, the only home we’ve ever known.”

What if Kindness Is the New Normal? A Call to Re-Imagine the Purpose of Education in the Post-COVID World

More on Learning Ecosystems and Leadership

Learning Ecosystems and Leadership
Qatar Foundation’s WISE ALL-IN Case Studies Given that school leadership is one of the most...
Sébastien Turbot CEO and Chief Curator, eko6

Learning Ecosystems and Leadership
Creating alternative approaches for how we learn together now and in the future.
Bo Stjerne Thomsen, Chair of Learning through Play, LEGO Foundation

The Future of Learning is in Your Community

Access and Inclusion Emerging Technologies and Edtech Early Childhood Higher Education Learning and Behavioural Sciences Learning Ecosystems and Leadership Life Skills Designing an Effective Training Program World of Work
We use cookies for analytics, advertising and to improve your experience. By continuing to use our site, you accept our use of cookies and our Privacy Policy.I ACCEPT. Read More
Privacy & Cookies Policy

This website uses cookies to improve your experience while you navigate through the website. Out of these, the cookies that are categorized as necessary are stored on your browser as they are essential for the working of basic functionalities of the website. We also use third-party cookies that help us analyze and understand how you use this website. These cookies will be stored in your browser only with your consent. You also have the option to opt-out of these cookies. But opting out of some of these cookies may affect your browsing experience.
Necessary Always Enabled

Any cookies that may not be particularly necessary for the website to function and is used specifically to collect user personal data via analytics, ads, other embedded contents are termed as non-necessary cookies. It is mandatory to procure user consent prior to running these cookies on your website.