Based on our workshops held in the Middle East, Canada and the USA, we documented on-the-ground challenges, which paralleled in similarities across different regions. 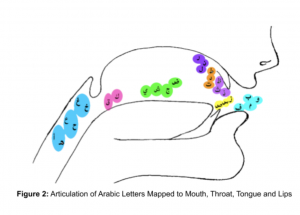 Our experiments revealed one extra hidden challenge. Apparently, when introducing one letter for students, it is usually presented with its three short vowel variations, for example (/ba/, /bo/,/be/) (بَ بُ بِ).  We conducted an experiment to examine how kids would receive this first lesson. We changed the forms of Arabic letters and vowels while keeping the sounds. For example, we replaced the forms of the above example for (/ba/, /bo/,/be/) with these ones:

). Hence, we identified the burying challenge as it was very frustrating to find the letter or make sense of the other scribbles beside it.  After conducting this experiment on over 1000 teachers and parents, it was clearer why kids feel frustrated when learning Arabic in the traditional way.

Necessity is the mother of invention

Consequently, we need a better teaching model to accelerate students’ achievements.  The current model is causing some students to fall behind as they reach middle school without Arabic literacy fluency. Other students memorize Arabic subject for grades. We need a model that cultivates for life-long, curious readers and learners.

In fact, the most significant inventions in the Arabic language is adding dots and vowels forms to letters to simplify reading Qura’an for non-native speakers.  Moreover, Sibawayh, a foundational grammarian of Arabic,  attempted to reorder the alphabets based on their phonetic characteristics.

The lack of ground-breaking innovation in modern Arabic literacy model has pushed us to start our research journey. The research’s mission is to enable children to learn reading and writing in a simple, accelerated and fun way to inspire them to fall in love with reading in Arabic. It is time to keep “learning to read” in elementary so upper elementary students can start “reading to learn;” we need to #innovate_reading.

Are Randomized Evaluations the Key to Innovation in Early Childhood Development? Lessons from Latin America

Early Childhood
ECD in a time of crisis.

Do Children need to go ‘Back to School’?

Early Childhood
Do we need to use children’s 'time spend in school' as an indicator of learning?

Early Childhood
A child’s first teacher is, almost always, a parent or carer.